Virtual Summit Oct. 7-8: How to Coach Teachers to Teach Almost Anything

The Virtual Coaching Summit was scheduled to be a two-day live event; however, instead of a cancellation due to Jill Jackson’s untimely death in August, Jackson Consulting will provide a pre-recorded Virtual Coaching Summit that will feature Jill Jackson as the facilitator teaching How to Coach Teachers to Teach Almost Anything, a simple, practical plan for knowing how to coach, what to coach, and who to coach on your staff.

Highlights of what participants will learn:

o There is a maximum capacity of 100 participants for the event, so register early.

o Textbooks will be mailed to participants’ district location.

o For more information on contents of the text: https://Jackson-consulting.com/coach/order

Posted by South Dakota Department of Education at 6:49 AM

Executive Proclamation
Office of the Governor
State of South Dakota

WHEREAS, suicide is a preventable public health problem. By knowing how to start the conversation, listen and provide support to someone in need, we can save lives; and

WHEREAS, in 2019, South Dakota had the second highest number of suicides ever reported in the state; and

WHEREAS, in 2019, 23.1 percent of high school students in South Dakota reported they had seriously considered suicide; and

WHEREAS, suicide affects everyone, but some groups are at higher risk than others. Men are about four times more likely than women to die from suicide. However, women are more likely to express suicidal thoughts and to make nonfatal attempts than men; and

WHEREAS, individuals are more likely to feel less depressed, less suicidal, less overwhelmed, and more hopeful after speaking to someone who listens without judgment; and

WHEREAS, we all can be the one to help prevent suicide by learning the five action steps: asking the question, keeping them safe, be there, help them connect, and follow-up; and

WHEREAS, hope, help, and healing is possible. Mental health and crisis intervention services are available in South Dakota, including the National Suicide Prevention Lifeline at 1.800.273.TALK (8255) and the Crisis Text Line by text at 741741.

Now, therefore, I, Kristi Noem, Governor of the State of South Dakota, do hereby proclaim September 2020, as

Posted by South Dakota Department of Education at 12:07 PM

Time running out to register for CNA Regional Workshops

Workshops are facilitated by professionals trained and experienced in the South Dakota Comprehensive Needs Assessment. The process is designed to build a school’s capacity in conducting the needs analysis, looking at both qualitative and quantitative data sources.

The workshops are intended for schools identified for school improvement (targeted support and improvement), Title I schoolwide schools, and any school that would like support conducting a needs analysis.

1) Half day: introduction meeting and overview of the process

School teams must commit to attend all five sessions, send a team of 3-5, and complete the homework assigned between sessions.

To register, email Jordan Varilek with the South Dakota Department of Education.

Posted by South Dakota Department of Education at 1:40 PM

The South Dakota Department of Education is again partnering with the Center for the Prevention of Child Maltreatment to provide no-cost registration opportunities for up to two educators from each school district across the state. A certificate for contact hours will also be available if educators are interested.

If your district has educators who would like to attend this virtual conference, please contact Shannon Malone with their name(s), email address, job title, school, and district. As soon as the registration link becomes available, they will be provided with the registration code. 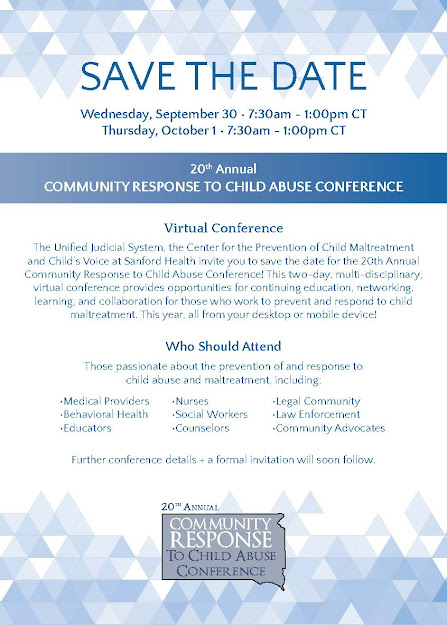 Posted by South Dakota Department of Education at 2:17 PM