Some very important work got underway this summer in Pierre. A number of dedicated South Dakota educators and other stakeholders, including parents, began reviewing and revising South Dakota’s content standards in the areas of English language arts and math. At the state level, we remain committed to our standards and confident that they are preparing our students to be college, career and life ready.


Reviewing and revising standards in all content areas is a normal process that occurs at regular intervals (on average, about every seven years) to ensure students experience the most up-to-date, relevant education possible.


Throughout the 2016-17 school year, all of our state’s K-12 educators will have the opportunity to study the standards work groups’ proposed changes and offer feedback.


This is a great professional development opportunity. Department of Education staff and standards work group participants have developed a standards review toolkit to help guide schools’ discussions. In addition, a number of these individuals will be available to give school staff presentations on these topics.


Unfortunately, there is sometimes a misperception that standards review is simply a matter of reading over existing standards and offering some minor tweaks. However, if you could be a “fly on the wall” during these meetings, I promise you would hear a good deal of energetic discussion and debate from individuals who are passionate advocates for South Dakota students. Feedback from Redfield Elementary Principal and ELA work group member Samantha Walder is a great example:


“There were educated, informed (sometimes lively) debates over the addition, amendment or deletion of nearly every word or phrase in almost every ELA Standard Strand K-12,” Walder said.


In June 2017, the math and ELA standards work groups will meet to consider feedback from the education field and make any necessary changes before the revised standards are taken to the state Board of Education for public hearings. Four public hearings on each set of standards will be held during the 2017-18 school year. 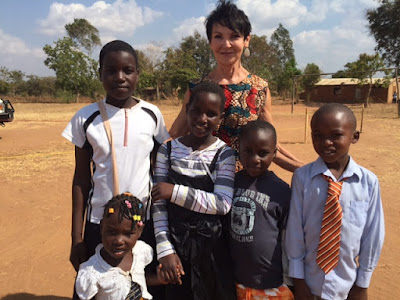 During the last week of August, I traveled to Malawi, Africa. My trip was sponsored by the U.S. Speaker program. I was joined by the National Teacher of the Year and met with a number of individuals from teacher preparation and K-12 leadership, as well as several government figures.


Arriving in Lilongwe, capital city of Malawi, was a cultural shock. The ride to the hotel was my first introduction to what I would encounter throughout the week: lines of people walking along the roadsides carrying food, water, wood and other supplies.


We first visited some of the public schools in Lilongwe. The facilities consist primarily of brick buildings with concrete floors and stark furnishings consisting of only desks or tables. Some schools have electricity, but many don't, and in the rural areas, school could mean meeting under a tree.  Class sizes typically are over 100.  Students often have over an hour walk to get to school, which means an additional challenge with school typically beginning at 7 a.m.


In a village two hours from Lilongwe, we saw a new group of 13 Peace Corps inductees sworn in by the Embassy. After spending three months with the families of the village, they were preparing to go out to teach across the country. The village had put together a large celebration and going away ceremony for these young people. There is no electricity or running water in this village, and the huts had dirt floors. The Peace Corp inductees had learned to cook the local food, consisting mainly of maize and soy. They learned to wash clothes by hand and to speak the language with some fluency.

The next day, they would leave the families they had grown to love and depend on as well as the friendships they had developed as they headed to their schools across the country to survive on their own. With the country having gone through a devastating drought the past year, it is expected that one-third of the 18 million people will experience some level of food deprivation and starvation. Preparing these young people to deal with these sorts of conditions is beyond the normal concerns of supporting first-year teachers we discuss in the U.S.


We traveled to the eastern side of the country to visit a school for the blind and developmentally disabled in a village called Salima. Individuals at the school were very excited and prepared to present to us about their work. We gathered in a small dimly lit building. Goats and chickens surrounded the building, and women gathered at the well to pump water to take home. Teachers spoke to us about their work and had blind students "perform" their ability to read and use a computer with what they deemed to be the newest technology with braillers and printers when there was electricity available (it frequently went out).


Conditions were stark, but the students' successes were heartwarming. Parents came with their children, and it was easy to see the pride they had in their child's ability to read and learn. The dorm consisted of two single rooms for about 20 boys and 20 girls. The bunk beds had old, worn out two-inch foam rubber for mattresses and dirty blankets. Mosquito nets hung from the ceiling and beds above to protect the kids at night from the deadly risk of malaria. Showers were a single concrete room with a bucket available when the water is turned off due to the restrictions imposed across the country. Toilets were flushed by water sitting in a bucket. While facilities were lacking, the level of care and compassion for the students was quite obvious.


The culture of Malawi is one where affection is not openly exhibited. It would not be normal for a teacher to hug a child, as teachers are seen as the givers of knowledge only. The goal of the educational system there is for students to pass the national exam given at the end of grade eight to enter secondary school; once in the middle of high school and finally to leave the system. Without passing, students are moved from one level to another and have no opportunity to enter the postsecondary system. Thus, the pressure to perform academically is foremost in the minds of the students and parents without attention given to any of the social or emotional aspects we deal with in America.


The day is very short due to the distance students must travel by foot and their need to go home and do chores once the day ends. Students do not have the extras of music, art or PE and certainly don't need physical exercise after walking over an hour one way every day.


The faces, the sights, the people are imprinted in my mind. I realize more than ever how blessed we are to live here and have opportunities that we take so for granted on a daily basis. Being able to simply turn on a faucet or flush a toilet, or to switch on lights and keep food fresh...these are things we view as necessities. The same things are completely unknown to another part of the world and yet, the people appear happy and content. We can learn something from that.
----------------------
Hear Dr. Schopp's recent interview about her trip to Africa on South Dakota Public Broadcasting.
Posted by South Dakota Department of Education at 9:43 AM